This week's  FPC was a marked improvement over last week's FPC. However this is a pretty accurate representation of how I am feeling about the food pantry challenge, haha 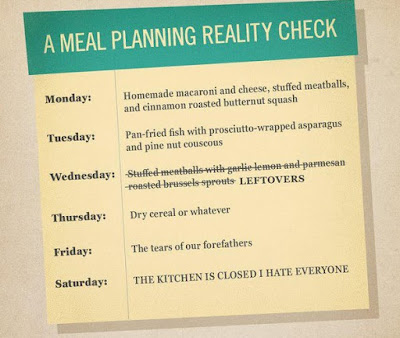 Friday  1/15/16-- left over, whatever you find on your own day. We ended up eating the leftover cheese coney's, salad and a handful of chips. There may have even been a bowl of cereal. It was a long, tough week.

Saturday 1/16/16--was a simple brinner dinner. Cheese omelette's, toast and bacon. I also drank several cups of chai tea. I am addicted to that stuff! It is kind of expensive habit, so I have a DIY on this (upcoming post).

Sunday 1/17/16--The original dinner plan was for baked chicken, green beans and a butternut soup. The hubbs wasn't feeling it, so I swapped out for cottage ham (more of the left over xmas ham), green beans, and potatoes with a side of cornbread. It was much needed on a cold, blustery day. The hubbs requested the leftovers for his lunch. 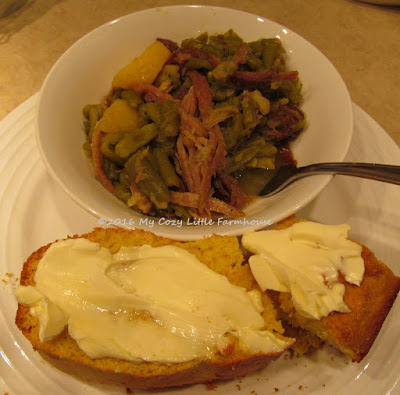 Monday 1/18/16--I was off work for MLK day. It was so nice to sleep in. I didn't feel guilty at all that the hubbs had to work. I just rolled right over and pulled the blanket over my head. haha  Tuna casserole was planned but since the hubbs had nixed the baked chicken for Sunday's dinner I made BBQ baked chicken and  Butternut veggie rice with a side of buttery brussel sprouts. I already had the chicken defrosted. The cool thing about the butternut rice is I found a package of fresh  butternut and veggies at the grocery. No extra prep work! 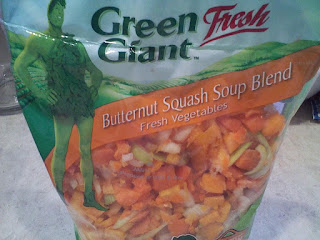 It turned out really well. I took the leftover rice in the day to work and sprinkled it with a little romano cheese. Yummy! 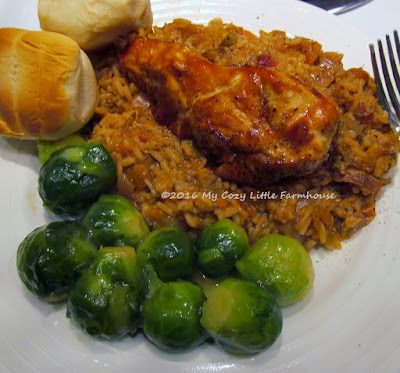 Tuesday 1/19/16--"Taco Tuesday" was replaced with open faced sloppy joes since I had rice for dinner and then again for lunch. I didn't have any buns in the freezer or time to make any, so I used toasted bread slices tossed a little shredded cheese with joes and called it open faced. Whatever works, ha.

The next day was my work "tailgating" themed luncheon. So I made a monster batch (7 lbs!) of the most delicious, molasses, brown sugared, bbq'd baked beans. Which of course, we ended up having some with the sloppy joes. OMG-were they ever good. I know 7 lbs seems like a lot but there were approximately 150 people to feed.  I had to bake them in 2 batches and combine then when finished. All but about a cupful was eaten, so that was a good indicator that they were yummy.

Wednesday 1/20/16--Kielbasa and kraut was replaced by frozen pizza for the hubbs and a bowl of cereal and fruit for me. I was kinda sick of food after the tailgating party at work.

Thursday 1/21/16--The sloppy joes from the original plan were moved to Tuesday. We ended up eating sandwiches and  I heated up some vegetable soup I had frozen from a previous batch. I  was glad for a quick fix because I worked over by 2 hrs and planned an early night. The forecast was calling for major snow so I had a 4 am wake up. bleh

Wins for week 3
I was able to cook nearly everyday but didn't follow the planned menus.  Reduced food waste is great. Zero waste would be better.

I am not sure if this is loss or a win, but I didn't follow the meal plan except for 2 days.The objective is to use what I have on hand--which I did. and we didn't eat out at all this week, so that is a cost savings.

Losses for week 3
I can say that food waste is down considerably but we discarded 1 cup of baked beans, 1 &1/2 cups of veggie rice, 4 dinner rolls and 1 yogurt (the seal was punctured). With the exception of the yogurt the other food scraps were put out back by the woods for the critters.

Oh the budget... Y'all--I am still struggling with this. I spent $71. Way, WAY over my target of $40. I definitely have some impulse buys,  after looking at the receipts, produce and back filling some staples are kind of pricey. For instance, coconut oil is $6, I spent $20 on fresh produce alone, and $14 in the deli. That was my entire budget. I am over budget by $77 for the month. I think a better budget would be $70 since that is the average over 3 weeks but I will see how things shake out next week.

Posted by Tonya @ My Cozy Little Farmhouse at 10:42 PM