Welcome to the cat house

I am beginning to feel a little like the crazy cat-lady. Every time I turned around there was a cat in my way, on something, or in something. Case in point... 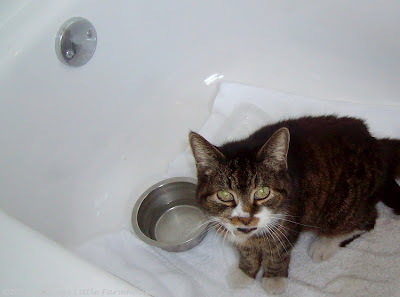 This is Wussie-Cat. When I first found her she was a several weeks old kitten  hiding behind a straw bale in a former coworker's barn. Her name is appropriate because she is afraid of everything! The funniest thing she ever did to live up to her name was when she came face to face with a large bull frog. She hissed and arched her back. Well the frog decided to puff himself out. They did this 2 or 3 times. However when the frog  raised up on his back legs and let out a loud croak --she completely freaked out! We nearly wet ourselves from laughing. Had we videotaped and submitted this to America's home videos- we would have won some kind of prize. I am pretty sure she is senile. I know she is partially deaf and blind. But given the fact she is 18 years old  you will have that. Today I caught her trying  to  climb  up the aluminum siding to get to the  the window. Maybe in an attempt to get my attention. She must have  really wanted in...and forgot where the door is. She decided the bathtub is a good place to hang out. I decided to go with it put a towel down along with some food and water to let her hang out for a while. 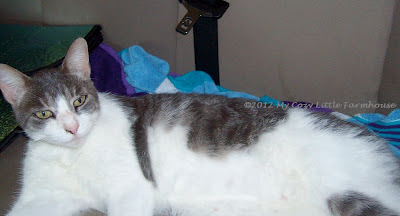 This is Boy Meow-Meow. We have had him for about 4 years. He was about 2 when we adopted him. The hubbs takes the credit for him though. Some (cruel and asinine) person had shoved him in a pet carrier and left him by an apartment complex dumpster. Over a holiday weekend. We can only surmise he was there for several days without food or water. He will not go near a cat carrier to this day.He became my husband's maintenance cat hanging out around the maintenance garage. His name came about because he is so verbose and LOUD!.  One day the hubbs was walking the apartment complex grounds picking up trash when he he heard a very loud meowing. Meow, meow, MEOW, MEEEEYOOOOWWEHEW...and up over the hill comes this cat meowing and running as fast as he could towards my hubbs. Well the hubbs laughed so hard he cried and hence his name was born. I met Boy Meow-Meow a few weeks later and decided he needed to come home with us. Yeah- that was quite an adventurous 7 mile road home since he couldn't go in a pet carrier. I still carry the scars on my shoulder from that one! Totally worth it though...except when he has been hunting and decides to leave me presents...yuck! Anyhoo- today he decided to snooze in the back seat of my car. I jumped in the car to leave for some quick errands. Well he was none to happy with that! 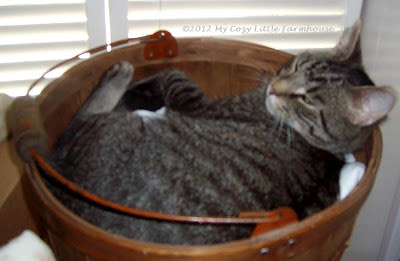 This is Sam-Sam. Formerly known as Phillip. How do I know he was a Phillip? Well a little over a year ago, I was sitting in the cool October evening air mourning the loss of my lbc (little black cat) name Elby (L B C-get it?) when suddenly there is a fuzzy ball of fur running towards me meowing. This grey fuzzball was so cold  and of course hungry. He cried and cried wanting to come inside my house, but the hubbs was being mean and said NO MORE ANIMALS! And he meant it--that worked out well for him didn't it? ha So I was able to sneak feed him and hid a pet carrier on the porch so he had some shelter. Until the hubbs stone cold busted me one night. dah dah dummm! Well the hubbs said he had to go! I tearfully took him to the local animal control. He was scanned and found to have a chip. He used to belong to someone. He had a name (Phillip) and possibly a family. Phew I was informed he would be held  for 48 hrs. If his family didn't retrieve him he would be euthanized. OMG!  They gave me the owner's name and address. I called and sent a letter. I checked MySpace, Facebook and Twitter for the matching person's name but to no avail. If I didn't do something he was going to die! On the 3rd night I went to my hubbs and told him. There may have been a lot of tears involved. The hubbs gave me the 3 words I wanted to hear.Go get him. No need to tell  me twice. I may have squealed tires trying to get there before they closed. Twenty minutes and $50 later he was mine. We changed his name and brought him home. Doing time in the Big House must have traumatized him because he was (and still is) kinda skittish. He also wouldn't lay near me or purr for a very very long time. I didn't know a cat be clumsy--so boy is that the cat for me. He is the most ungraceful cat I have ever known! His nickname is Calamity Sam, because he is always breaking something!  I thought I was going to lose him a few weeks ago when he became really sick. I thought all the hard work of him trusting me was gone when I had to put him back in the pet carrier. Surprisingly he realized I wasn't going to dump him and seemed almost grateful when he new he was getting help. Now he loves on me and occasionally will even sleep next to me. It really is the little things, haha Well today he decided to make a bed out of a basket of clean white socks. Good thing they are the hubbs socks and not mine!

Well regardless of their antics, I love them all!

Email ThisBlogThis!Share to TwitterShare to FacebookShare to Pinterest
Labels: pets