I know summer is not officially over but we have already begun preparing for winter. After our very disappointing summer, I really don't mind, ha. We kicked it off by purchasing a new wood stove for the hubbs "man land" room. According to the Old Farmer's Almanac it is going to be a blustery cold winter!

This is a US Stove 1261 Cast Iron small log stove. We bought it for $189.99 at Rural King (which was $202 and some change after taxes). What is so amazing is this stove was in a crate small enough to fit in the backseat of my Ford Focus! This smaller sized  stove is better suited for the hubb's room (about 120sf).  The added bonus of this stove is you can cook on it! So it has an extra function in the event we lose power and are unable to get fuel for the generator. We can  always hunker down in his man room. 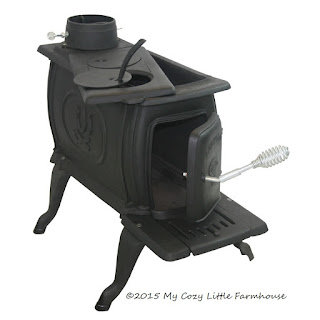 The biggest hurdle we have will be removing the hulking beast of the old stove. It is very old (we got it used, free from a friend of the hubbs) and HEAVY! The heat bricks have disintegrated. It has rusted holes and is no longer safe. We plan to remove the remaining fire brick, disassemble what we can, and hope to scrap the iron.

The hubbs is replacing all the stove pipe over the next few weeks. We expect the upgrade will be not only more safe but more efficient, as well. We  have begun to source  firewood and hope to have a cord bought, split and stacked by October 1.

Since the hubbs is going to open up the window area where the stove pipe currently vents, we have decided to upgrade it a bit, as well. The entire window opening and plate glass will be removed. One third will be framed out for the vent. This portion will have cement board, tile the interior with leftover tile  from another project, and trimmed for finished look. The exterior is going to be faced with thin brick veneer or concrete block veneer--Yes there is such a thing!-- if we can find it local at a reasonable cost, which can then be painted the same color as the garage. The remaining 2/3 portion of the opening will have a functional window, big enough to install a small window unit A/C.

The hubbs is unsure if he wants to install the window before winter.  He said he may just board and cover it for the winter but he would finish the stove pipe vent side. He said he wanted to empty the room, paint, install his exhaust ventilation (because he is a smoker) and set up the wood stove. Personally I think it can all be done before the cold snap but he said he would like to focus on the back of our house and installing the kitchen door. I found that to be a logical reason. Shhhh don't tell him I actually like his idea!

This was not a project on our lists and may seem somewhat frivolous given all the other things we need to do. However, I felt we are always focused on the house and the poor hubbs is an afterthought. He works so hard and deserves a nice comfortable place to relax. Since he prefers hanging out in his man room after work, I think it's a fair trade off, as I have a nice updated kitchen.

Anyone else planning ahead for winter?

Posted by Tonya @ My Cozy Little Farmhouse at 9:41 PM