We are more redneck than I care to admit

Now I know y'all are asking why I would make a statement like that.

You see my washer broke on me Thursday--which is no surprise because it has been acting up for months. The drain sensor switch thingy wouldn't engage automatically and you would have to go in and push down on the lid of the washer. Ok sometimes you had to slam it real hard. Or maybe it was just me slamming it real hard.

Then it happened. The washer stopped. Filled with dirty  water and load of my hubby's work clothes. Which are always delightful to try and clean. Considering you never know one day from the next if he is digging ditches, painting or crawling around in the trash of an industrial garbage compacter. Um yeah...

So I pioneer roughed it and pull the clothes out (without even wearing gloves), wrung them out and waited for the hubbs to give the washer once over. And the entire time I am daydreaming of my fantasy laundry room. All shiny and new. With fancy schmancy appliances. And not in the same room with the toilet.

Well he said could rig it. Um yes because that is a phrase that makes me comfortable. Especially on equipment that involves lots of water. And electricity. He explained to me what was wrong. All I heard was "blah, blah, sensor, blah, blah, wire, blah, blah, by-pass, self tapping screw, blah, blah, will work just fine, blah, blah. "

Which actually translated to "Sucka! You don't get that shiny new washer and dryer now" ...Thanks. Thanks a lot.

He did his best to reassure me it would be fine. You won't even be able to tell he says.

REALLY?! Do YOU notice anything? 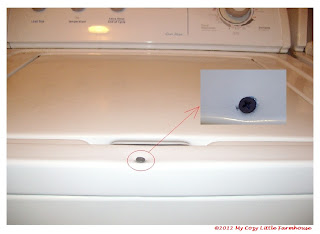 Although maybe we are not completely redneck because at least there isn't any Duck tape...

And the really crappy part? It REALLY does work just fine...DAMN IT!

Posted by Tonya @ My Cozy Little Farmhouse at 1:04 AM