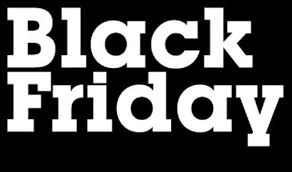 Those two words scare me. I used to work in retail, the last time being ten years ago when I was in between jobs.

What is is about Black Friday that turns otherwise mostly sane people into blood thirsty, stark raving mad lunatic shoppers?

How many of you braved the mass chaos?

Two of my sisters were shopping by 5pm yesterday and finished up at 6am this morning. Their excursion involved the mall, Home Depot and not one but two Walmarts. I think they  now have street cred. Especially since one of them slapped a dude for pushing. I.AM.NOT.JOKING! 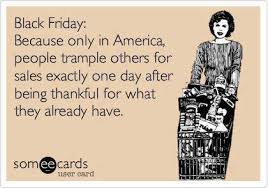 I did venture the 3 miles to Home Depot at 5am for a couple of things for the hubbs and stopped by Kohls around 6am. By then the crowds were mostly gone. Those poor clerks look like they had  survived a blitzkrieg.

I can see the next trend will be therapy groups for Black Friday survivors. I can just envision the groups huddled together, speaking in hushed tones.
A little red head with freckles says"Yeah I survived Kohls 2012." Then a burly dude with a grizzly beard who has been quietly stirring his coffee finally speaks up and says, " I was at Walmart 2012--wave 1. They came at me from every direction.  I was so overwhelmed. The pushing, shoving and screaming. I looked around panicking and realized I may not make it out of this. I hit my radio and told them to tell my wife and kids  love them. I am not ashamed to say I cried. I still can hear the shouting and smell the intermingled odors of sweat and desperation.  I just can't go back there man..." Now he has his head in hands and his body is wracked with sobs...The group sits in stunned  silence because they have met a true warrior...." 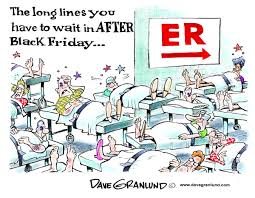 Ok, so I may have taken a little creative license there but from the overheard  snippets of conversation, the truth is not that far off. The point I am trying to make I hope if you were or are still out there, have some compassion for those retail workers. They have a tough job, little pay, reduced if any benefits and constantly dealing with the public. So you know it ain't pretty!

Make sure to say please, thank you, excuse me and mostly have nice day. Those poor people could use some kind words.


Posted by Tonya @ My Cozy Little Farmhouse at 2:15 PM

Email ThisBlogThis!Share to TwitterShare to FacebookShare to Pinterest
Labels: Shopping