Welcome to the Canine Prison

Remember when I told y'all about two of my dogs getting in a particularly bad (AND EXPENSIVE) scuffle?
You know-- the nearly $1000 dollar vet bill after assessment, surgery and meds?  The bill that is going to take me months to pay off.

So I have been working really hard to re-integrate the dogs because it exhausting and sometimes confusing to maintain the series of muzzles, gates and barriers. While this is not exactly the most attractive decor element, it is all about the safety of the dogs since I don't have very many visitors. 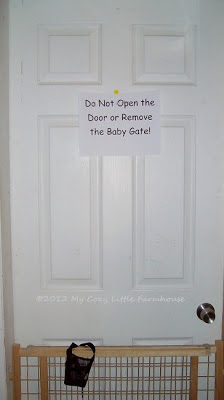 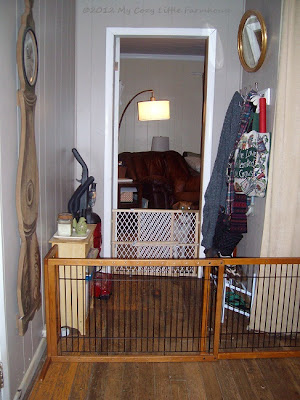 I thought things were going well. I had been able to remove the muzzles, had them in the same room with me using the gates as a temporary barrier and they were calm (not trying to kill each other). 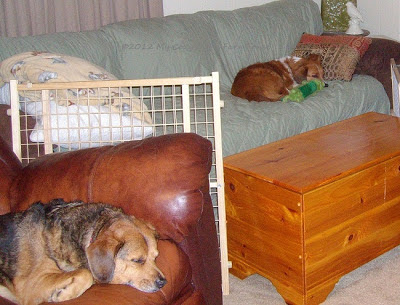 They were even playing again, then on Sunday night, Tovah attacked Chubbs. She is the aggressor and we have no ideal why. Fortunately we had them pulled apart in under 30 seconds but she slipped her collar and attacked a second time and my hand and arm were bit (by Tovah) in the process. So now I am sporting some pretty nasty contusions and bruises. However during that 30 second scuffle Tovah ended with several lacerations including a chunk out of her paw pad. Nothing severe enough to require stitches. It was a bloody mess though. I have  been cleaning her wounds every day, have her on pain meds and antibiotics once again.

So I am back to gates, new muzzles and harnesses for both. She has an appointment for a full blood panel. I can only hope this is a chemical imbalance as opposed to a behavioral issue. She has been increasing in her aggression for nearly six months. Aggression with food, toys, towards the cat, the guinea pigs, the neighbors dogs, anyone or anything outside the house, some aggression towards Frazzle (the puppy) and now Chubbs. Obviously he is bigger and can protect himself but she has been injured twice now. I can not allow a third time. Re-homing is not an option. My animals are a lifetime commitment.

Chubbs is supposedly my "aggressive" dog but I trust him with the puppy more than I do Tovah. Just look how ferocious he is...haha
We joke and say he is the babysitter. He has exhibited no signs of aggression--other than the occasional back off  puppy your getting on my nerves growl. When that happens, he is tired and we kennel Frazzle or put him in the puppy playpen. If anything, Chubbs has shown considerable protectiveness over Frazzle.

So for now it is separate rooms, feedings and potty breaks for Tovah. She is miserable being penned in another room, but until I can figure out what is wrong, this is what we are going to do. If it turns out Tovah has a behavioral issue then I will find a way to to correct it with training and maybe a few sessions with a canine behaviorist.

Posted by Tonya @ My Cozy Little Farmhouse at 9:57 PM

Email ThisBlogThis!Share to TwitterShare to FacebookShare to Pinterest
Labels: pets