I finally wrote the post about my storm doors

Remember waaaayyyyy back in October when I talked about my entry doors? And storm doors?

Okay then--click HERE and HERE--go ahead, I have time, I'll wait. (Man I sound like a mom even on my blog-sheesh!)

It turned out we did not have to take off all the wood strips before installing the storm door. Of course the hubbs figure this out AFTER he had removed it--DOH! Also we purposely installed the storm door the opposite swing of the kitchen door. The reason? Because the winds usual blow infrom the North (on your left) and to make it easier on me when I carry groceries in from the car. However, the dogs still go the wrong side every time, haha.

The installation of the storm door had an immediate effect of reducing the drafts by about 90%. There is a major leak coming from under the sill plate. The hubbs was going to use expandable spray foam by removing the plate (it is notched to fit the frame and in theory should have slid out) but the screws are rusted and bored out.He then tried to see if there was any kind of access from under (by going down to the creepy dungeon cellar but access is blocked (literally by block and stone). Until we actually replace the interior door I am using a high tech draft blocker by rolling a thick towel and placing it at the base of the door.

Speaking of replacing the door, since it will be custom, I need to determine size and placement of the window. Do I "match" the size of the storm door window or have a window to match the top pane of the storm door? I am not sure what would be best. Once I decide on the door/ company, I am sure they can do a mock up so I can best visualize it.

The addition of the storm door make this entry look so much nicer! 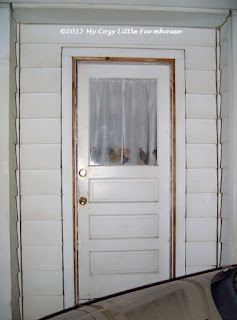 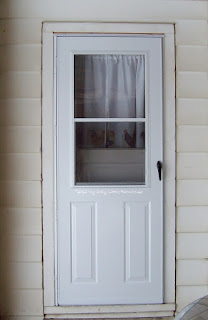 We purchased the same time of storm door for the main entry. The hubs had a little trouble on the install of the upper track. On your upper left hand corner there was a bolt where the track was supposed to go. So he had to notch it out to fit. We also had a nearly 1 inch gap at the very bottom of the door frame where the storm door should sit flush. Fortunately these gaps were remedied with extra thick weather stripping. Again the effect was immediate in the reduction of cold air entering the house 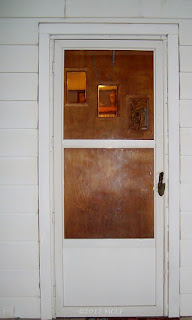 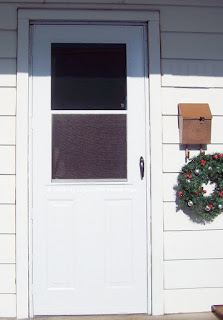 We also found the residual cold air is at the base of the door. Not only do I use the high tech towel draft blocker technique--a pet bed in front the door works great, haha!
We are slooowwwwlllyyy making some progress...

Posted by Tonya @ My Cozy Little Farmhouse at 12:02 AM

Email ThisBlogThis!Share to TwitterShare to FacebookShare to Pinterest
Labels: DOORS