I was on the naughty list for the post office. Not naughty enough to be on a wanted poster or be charged with crimes by the postmaster general. My mail was stopped because of one of my dogs.  Tovah to be specific. She was un-tethered (with me), at least 20 feet away from the post carrier (who arrived an hour and half early) and she barked at the carrier.
I told Tovah to "SIT" (she did) and I clipped her on her line. I immediately apologized to carrier, indicating she had caught us off guard because she was early and she said it was no big deal. Cool. Except it wasn't cool. She reported me. And they stopped my mail service!
Except I didn't KNOW they had stopped my mail service until after a week of no mail when I called. This is when I was informed of everything.  I asked them WHY I wasn't informed earlier of the issue and they told me they sent me a letter.
THEY SENT ME A LETTER...BUT THEY HAD STOPPED MY MAIL SERVICE!
I was not happy, obviously, but need my mail service. I asked what was I required to do. I was told to write a letter indicating my dogs would be tethered.  No problem!  A short time later I take my happy ass over to the post office to deliver the letter and get my mail. THEN I was informed  , tethering the dogs wasn't good enough. I need to either move my mailbox or rent a PO box. WHAT??!! Suffice it to say I was FURIOUS!
According to the post mistress, the carrier felt "threatened".  The reason I am so angry is because there are dogs constantly running loose on my street and the next street over. ONE TIME I am caught off guard with one un-tethered and I am punished.
There is a back story for all of this. This particular carrier has had a multitude of issues. She has complained there was snow on the path (when it was still snowing). She has complained the stepping stones were slick (the same morning we had sleet). She complained my dogs frightened her by jumping up on the inside of a LOCKED storm door--yes that is right they were inside my house at the time--and she complained.
All she had to do is talk to me. Be reasonable. I would have made accommodations. Instead things escalated to the point of hostility. I would never downplay work safety or the potential for an aggressive dog. ANY dog can become aggressive given a particular set of circumstances.  Yes, it is true my dog was not tethered at that moment but I had been running her in the back yard. We were 20 feet away. I had control of the situation. Tovah only barked. She was excited from running and there was someone in the yard. (According to my neighbor, a complaint was also made about their 14 year old toothless dog being vicious...guess if he could hobble that far he could gum her leg...)
So back to the post office I went, to to lock horns with the post mistress, who suggested I fence my back yard. Gee why didn't I think of that? Unfortunately that is not on the top of my MUST do list. That is a would be nice to do when when I have a few extra thousand dollars kind of project.  We argued over where the mailbox would be located. The carrier wanted it on a post by the road. Not gonna happen. Turns out we can't do that anyway because on one side of the property there are water and gas lines (so we can't dig there). On the other side of the driveway it is the neighbors property. Our previous mailbox location was on the house (on the porch) but our porch sets further back than the neighbors. 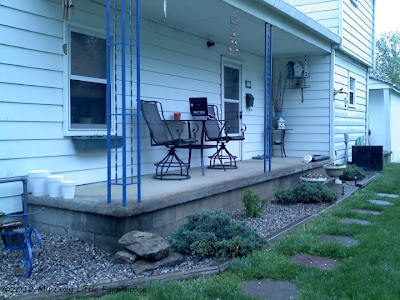 The only place we could move it was the end of the carport (which is the opposite side from original location). There is a line of sight from the road for the mail carrier, a line of sight from my living room window and even better for me-I can get my mail without going through the house first to get to the main entry (since we use the back door off the carport).
Although I did discover a slight issue with this location (on this lovely second day of Spring). I think I may need to install a clear deflector (not sure what the correct term is) to protect the mail from getting wet during driving rain or snow. The hubbs had planned on "toenailing" a board between the studs so the mailbox sets flush instead of recessed.  Maybe that wouldn't be the best ideal after all... 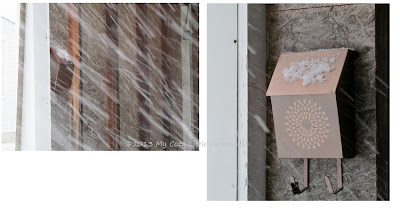 We need to spruce it up a little. I am not sure how yet. Maybe painting the interior wall of the carport? We will add some new house numbers over the carport. Reflective ones? Or maybe I can talk the hubbs into adding a solar spot light. and I can order some snazzy french enamel sign house numbers 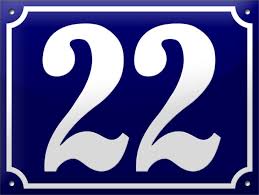 Traditional House Numbers by Other Metro Ramsign
Or how about this? 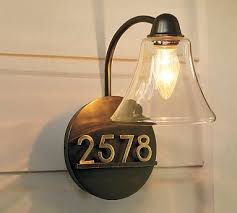 Traditional House Numbers by Other Metro Furniture And Accessories Pottery Barn
Or this? 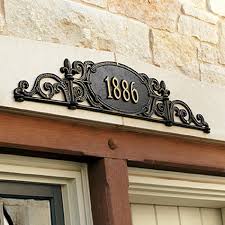 Traditional House Numbers by Other Metro Ballard Designs
Regardless we are gonna roll with it. The funniest thing when the mail was delivered Monday-we had a new mail (male) carrier, he said he was taking over this route for a while. Then he wanted to know why the mailbox moved....

Posted by Tonya @ My Cozy Little Farmhouse at 11:28 PM