I was awoken early this morning (about 430 am) as massive thunder & lightning storms rolled through the area. Since I was wide awake, thanks to the strobe light effect from the lightning,  I tossed in a load of laundry, made myself a cuppa tea and starting perusing Pinterest. You know it is trouble when I utter the word...Pinterest, ha! I was hungry so I started browsing recipes because I am glutton (ha) for punishment. I found a recipe for Polish Cream Cheese Coffee Cake, which actually linked back to All Recipes. As a wave sleepiness overcame me, I snuggled back under the blankets as visions of cream cheese filled coffee cake filled my dreams...

Most of the reviews were positive, so I decided to move forward and make this coffee cake.Please click on the hyperlink to see the ingredients and quantities.

I used a glass pan and reduced my temperature to 325°F. Make the dough by creaming together sugar, butter and 1 egg. One combined and smooth, add sour cream and vanilla. Add to this the flour, baking soda, baking powder and I added some cinnamon for extra flavor and a pinch of salt. Mix well.  The dough will be thick and sticky.

Heavily grease a 9x13 baking pan. Add half the dough into pan and press to bottom and sides. I tried to use my spatula and the dough was to sticky. So I washed my hands really well (again), sprayed then with a little cooking spray and pressed the dough into the pan. Setting the dough aside, I combined the 2 blocks of cream cheese, 1 egg, sugar, and I added 1/4 teaspoon lemon juice with 1/4 teaspoon real lemon extract. Once blended to a creamy consistency, pour over the dough in the pan and spread smooth.

Here is where I decided to Kick It Up! I had a jar of jam--one of my favorites! It isn't one that I made. It is from The Jam and Jelly Lady, which she is from whom I took my canning boot camp. The jam is so good. It is a soft style strawberry jam (no added pectin) with honey bourbon, cinnamon and hint of cayenne. Mmmmmm!  I spooned about 6 teaspoons of jam over the cream cheese filling then used a knife to gently swirl it in. I then added the remaining dough over this filling as little chunks. I mixed up the flour, butter, pecan and brown sugar streusel, adding an extra 2 tablespoons of flour, 2 tablespoons of oats and 1/2 teaspoon of cinnamon to get the consistency I needed because I only had  1/4 cup of pecans.

I baked this at 325°F for 55 minutes. I did a lower temperature because using a glass pan (you typically set the temperature 25° lower since glass is an very good conductor of heat) it took some extra time for the cheesecake center to set.

Hot from the oven! 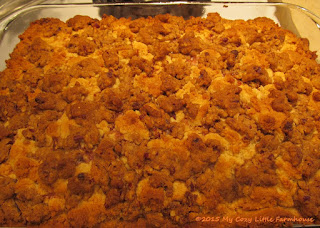 It took forever to cool so I could try it! Look at that beautiful layer of cheesecake goodness! 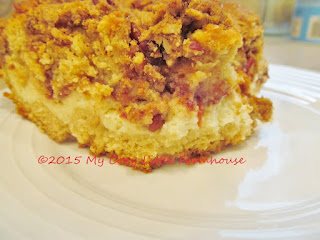 Oh wow! It is very tender and moist. A hint of the jam flavors complements the cheesecake flavor. 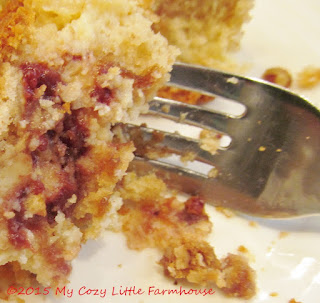 I found the process to be somewhat labor intensive.
When I make this again, I would NOT layer the dough, it think I would "poke holes" in the dough with a wooden spoon do a layer of jam, the cheese filling (or vice versa) and then the streusel. I would also like to try different flavors--like cinnamon & brandied peaches?  Definitely worth the effort!


Posted by Tonya @ My Cozy Little Farmhouse at 7:59 PM