Ok I have no ideal if that is really a word and since I don't speak French.  I hope I didn't just accidentally call someone a walrus's ass. But everything looks and sounds so much more sophisticated and classy in French. Anyhoo I recently blogged about this sweet little gossip bench HERE

It was looking a tad unloved and mistreated. 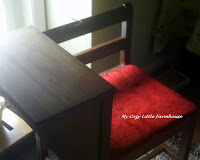 First thing I did was remove the seat by flipping it over taking out the screws. 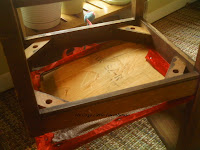 Next I gave the entire bench a good sanding using a sanding block. I wasn't concerned with the imperfections, I just wanted to give it some :teeth" for the paint to adhere. After sanding I tacked off the frame to remove any dust and particulates.

The color I painted is a mis-tint quart I found for $2.00 at Home Depot! Sweet! And it is the perfect Robin's Egg Blue! 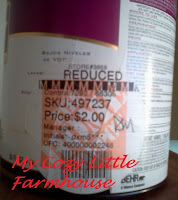 I didn't bother priming because I am going for a distressed finish.. I used a dry brush technique, which is funny because it really isn't dry or a brush. I used a cheap-o  $0.79 foam pad applicator which I dampened and then blotted on a paper towel. I applied a very, very thin layer of paint  going with direction of the grain. Allow to dry completely. I repeated this process until I began to get the desired effect.The original dark finish is more evident in some areas, less in in others. I really thought about where would the wear be most evident, so the darker "original finish" would show through 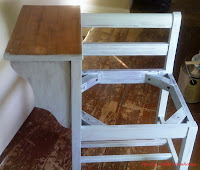 While the paint was drying, I removed the tacky red velvet , which was covering an even tackier plaid.-ish material. Not to mention...STANKY...I don't want to think about all the butt's that have sat on that cushion... Bleh. (Now I have to bleach my hands) 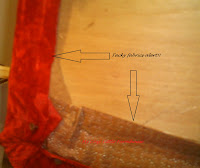 I inspected the wood seat for any cracks to determine if I needed to replace it. It does have to be strong enough to support my...errr girth? Heft? My chubby bum. It pretty much splintered apart so a new seat was fabricated from a 1/4 inch piece of scrap  plywood.  I bought a 2 inch piece of foam from Hobby Lobby. They were have a 30% sale so I scored my cushion for $2.97. Sweet!

I had to cut a small notch from the foam to align properly on the seat. An old electric carving knife works great for cutting the foam. Cuts like butter! Once I was sure I had the correct sized cushion, I did a dry fit on the foam.  I applied a thin spay of adhesive to the cushion and wood. Let that tack up for about 15-30 seconds and then attached the foam. I let this sit undisturbed for about an hour while I was on Facebook, Pinterest, napping, cleaning my house. ha!

I used a water-based gel stain (Mahogany) for the table part of the bench. I applied 2 coats, allowing to dry between applications.

I also applied a very diluted wash of stain over the entire bench to further "age" it. 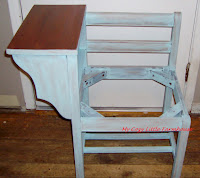 After laying out my fabric I decided where I needed to cut to have the optimum display on the design. The fabric has a fairly dense weave so I didn't bother using any liner fabric.  If this was a piece of furniture that would receive heavy use I would have gone with a denser foam pad, used batting, bought a heavier weight fabric and  used a muslin liner. But this bench will mainly be for display with very light use.
Center the fabric and do a small fold over. Staple 1 staple in the center. Pull the fabric taut, turnover to check there are no weird creases and put a staple on the opposite side. Repeat this process until secured. For the corners I did a simple envelope fold.  I used 1/4 inch  (6 mm) staples heavy duty staples. My plywood is 1/4 inch and even though I have a 2 inch cushion, I would really hate for a staple to pop though (ouch!) so I used the smallest staples I could find.

The seat was re-attached to the bench . It turned out so much better than I expected! 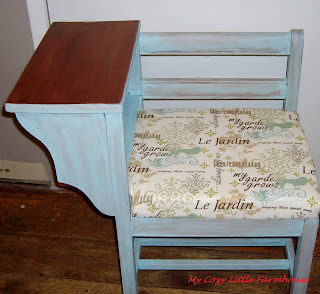 What do you think? Do you love it as much as I do? 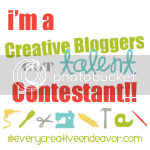 Posted by Tonya @ My Cozy Little Farmhouse at 8:21 PM