Welcome to Foodie Frugal Friday #5 ! Fridays are my "day off" from my blog. Every Friday I will feature some recipes from across the web and blog-land. 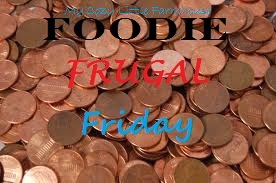 Feeling a wee-bit-O-Irish with St. Patty's day on Saturday. Here's a mind blower- approximately 30 MILLION Americans claim they are of Irish descent! This is according to the census 2010.

What is it that brings out the Irish in us all for St. Patrick's Day? I am sure for some it is a nod to familial history. But for most I believe it is simply just a chance to celebrate with friends and family, enjoy some good food,  enjoy some fine drink and usher in Spring. Talk about welcoming the green!


Most Irish dishes tend to be meat and potato heavy. Did you know corned beef and cabbage isn't traditional Irish fare? It wasn't popular until Irish immigrants came to America where beef was affordable did this dish become synonymous with Irish food.

A great many of Irish recipes resulted from using leftovers from previous meals. That is what frugality is all about- using what you have!

Doesn't this traditional Sausage and Potato Coddle look delicious? This is a hearty one dish meal, easy to make and easy on the pocketbook.
The traditional Dingle Pie is simple a lamb pasty. Originally they were made using mutton. The Dingle Pie were to believe originated from the famous Lammas (loaf mass) fair in Dingle, Co Kerry and offered a portable option to the traditional Shepherd's Pie.
Speaking of Shepherd's pie...It is a mutton or lamb pie with out a pastry, topped with potatoes. However when used with beef it is a Cottage Pie. (And in true frugal foodie form, I have a cheat version where I use left over sloppy joe's.  And top it with either mashed potatoes, cheesy mashed or if I am feeling adventurous, cayenne spiced sweet potatoes. But then I guess it isn't traditional Irish !)
The traditional Courgette soup is nothing more than Zucchini soup!  This is a great Spring dish, served chilled and we ALL know Zucchini is ever prolific! What a great way to use up some of your Zukes (instead of hiding them in your neighbors car or on their porch, ha)! Serve this with a nice salad and some traditional Soda bread or Brown bread--aye!
Craggaunowen Chicken is a dish named in honor of Craggaunowen  "the living past"  a heritage site located near Quinn in County Clare. Serve with Boxty, Colcannon or a Leek Tart.
This is the traditional Boxty which is simply an Irish potato pancake. Boxty is great for breakfast, brunch, an appetizer or a side dish. Here's a funny dittie about Boxty...

"Boxty on the griddle,
Boxty in the pan
If you don’t get boxty
You’ll never get a man "
Ireland has 7500 km (that's 4660 miles to us yanks) of gorgeous, unpolluted coastline that is rich in aquatic life, resulting in some exceptional seafood. Seafood is also one of Ireland's economic boons. Traditional fish cakes often use Cod or Salmon.
Some other traditional Irish dishes worth trying are:
Red Onion Tart with Cashel Blue Cheese
Truffled Wild Mushrooms Tartlets
Seafood chowder with potato and spring onions

Traditional and contemporary Irish desserts often use apples. But the dessert everyone talks about is the Guinness Chocolate cake! (Which is to die for!)
If Irish coffee isn't your thing (don't hate) here are some guaranteed  good time Erin Go Braugh libations!
http://dailycollegian.com/2012/03/15/authentic-irish-cocktails/
http://cocktails.about.com/od/cocktailrecipes/tp/st_pty_cktl_tp.htm

And now to leave you with some breathtaking photos of the land that inspired such a simple and savory fare
Beannachtam na Feile Padraig
(Happy St. Patrick's Day)