Normally I am quite sensitive to the fact someone told me I stink. Stank. Stunk. Whatever. It may have to do with the stinky pants girl episode. I think I still need therapy to deal with that one. No- I really don't want to talk about it. No....NO...NOOOO...Really?! You just are not gonna leave me alone until I tell you.. Fine.  It is soooo very embarrassing. Lean in a little closer while I whisper what happened....

In the not so distant past (see you thought this was a tortured childhood story--sadly--no) there was the VERY unfortunate incident that occurred while I was at work. I was attending a class and on my break I went outside to get some air. That and because I lose my mind doing the whole touchy feel-y corporate class crap. Well that was a poor choice of word.

Anyway it happened to have been a very nice day. Although the preceding days had been rainy. I sat down on the curb of the side walk and was texting friends. Biding my time until I had to return to my class. As I was walking in I caught a whiff of something...off. I checked my shoes...nope. Kept walking. I still smell...something...

Finally someone comes up to tell me there is something on the back of my pants. I go to the ladies room to look. I get some paper towels to start wiping off my pants. I thought maybe it was dirt. Or mud. Ummmm no. It was boot scrape poop. I sat in crap !!! OMG!!! I was mortified!  I had CRAP on the ass of pants. While I was at work. I was...STINKY PANTS GIRL...GAHHHHH!   True Story....FML! 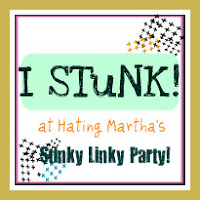 So you see WHY I might take offense at someone telling me I stink. Stank. Stunk. Whatever. Anyhoo, I make an exception because I was called out by Janel at Hating Martha. It's true. I voluntarily stunk up the blog-o-sphere with less than interesting post on my Vintage Headboard.  The post initially only garnered 10 views (which was probably all my family--bless their hearts!) and no comments. As in zilch. Zip. Nada, Goose egg.

Even worse than the post being an epic fail, is ME being the epic fail. As in I AM the procrastinator from hell. I have had the headboard and mirror for a decade...maybe more. I kept saying I was gonna do something with it AAAAANNNNDDDD never did.

So what. Guess I am a stinking loser. OR maybe--this is Winning. (sorry couldn't resist a little Charlie Sheen humor) ha ha

They say road to hell is paved with good intentions. If that is true then portal to hell is in my garage

Maybe I need to install a sign in front of my garage.

I wonder if the neighbors would approve?

ALLLL  that stuff  I said I was gonna do something with SOMEDAY?  Guess my someday is here. And I am totally gonna make the headboard and mirror awesome. (As for the other stuff--meh, I'll get to it--eventually)


No go away while I wallow in my own stink